World Disability Billiards and Snooker (WDBS) successfully staged its first-ever event outside of the UK last weekend in Belgium.

Held at The Trickshot in Bruges, the competition saw a mix of established WDBS players and local challengers come together for an event which represented another significant milestone for disability snooker globally.

There was a home victory in the wheelchair competition (Group 1-2) as Kurt Deklerck defeated Tony Southern 3-1 in the final to take the title.

Both players were in impressive form during the group stage, each winning three matches to progress to the showpiece match, but it was to be Deklerck’s day as the 22-time Belgian national champion emerged victorious to add his first WDBS crown to a personal CV which now boasts 114 snooker titles.

For the first time the event also saw a combined ambulant tournament staged for players from Groups 3-4, which saw Daniel Blunn come through to take a record fifth career WDBS event title with a 3-0 success against David Church.

Having dropped just one frame during the group stage, Blunn proved unstoppable in the knockout rounds as he underlined his position as the most successful WDBS player since the formation of the organisation back in 2015.

In the Challenge Cup competition for players who were unable to progress from the group stage of their respective competitions, there was a maiden victory for Danielle Findlay, who defeated Belgium’s Patrick Puttemans to take the gold medal.

The tournament was sponsored by 888lcd.co.uk, with all players and officials wearing the company logo on their waistcoats and branding prominently displayed around the venue. The event was also backed by the Hotel Velotel Bruges, which provided accommodation at a special rate for players competing in the event.

Club owner Olivier Vandenbohede and his team could not do enough to help the event and further support was also provided by leading World Snooker referee Olivier Marteel, who donned his white gloves to officiate during the weekend

The tournament also received extensive media support from IMG, who filmed a feature to be broadcast during the BBC’s coverage of this year’s professional World Championship next month, as well as regional news channel Focus WTV who interviewed players and officials during the weekend.

WDBS Chairman Nigel Mawer QPM said: “We have been made to feel so welcome in the beautiful city of Bruges and were extremely impressed with the club and the support that we have received in staging this event.

“I would also like to thank everybody who has helped to make this event happen, with a special mention for one of our regular Group 7 players Robert Craft, who made the trip to referee, as well as Reg Davies who not only provided coaching during the weekend, but played a key role in identifying the club as a suitable venue for the tournament.

“Following the success of the weekend, we did not hesitate to agree for the WDBS Belgian Open to return to The Trickshot and so I am delighted to announce that the event will return on 8-10 March 2019.”

The next WDBS event will be the Paul Hunter Disability Classic for players with learning and sensory disabilities, to be held at the Cueball Derby on 18-20 May 2018. Entries for the event are now open, with full information and entry forms available HERE. 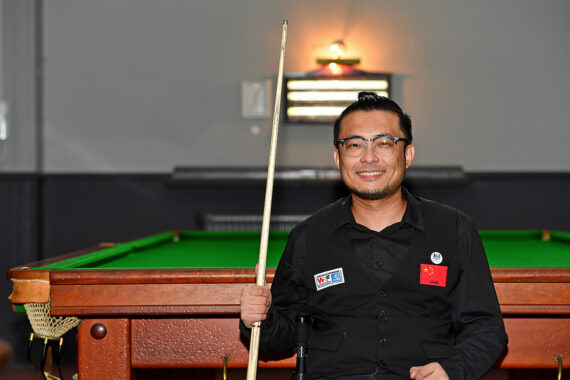