Perhaps the most remarkable success however was that enjoyed by Southampton’s David Moore, who claimed his maiden WDBS Group 5 victory, just months after a serious accident at work that left him with serious injuries including a fractured skull.

David, you have made the perfect start to the new 360Fizz WDBS Tour season with your victory in Hull. How satisfying was it to finally break your duck on the circuit and claim your first title, particularly having missed out in two previous finals?

It was an extremely satisfying weekend for me to get the win, particularly after a long journey up to Hull from Southampton via train, underground and taxi. I felt very relaxed the whole weekend, the club [Tradewell Snooker Club] and its staff were very nice and welcoming.

It didn’t cross my mind as I got the final that it would be my third chance to try and finally win a tournament. But hopefully now I will kick on and win a few more!

Your success was of course all the more remarkable as it came off the back of a difficult few months for you after the accident that you suffered at work shortly after competing in Bruges. Tell us about the accident and the impact that had upon you.

The accident was an extremely difficult time, more so for my family as I don’t remember much of it at all. I had two ambulances, a fire engine and a helicopter out to me.

The first few days I had no idea who my own family were. I fractured my skull and broke my collarbone and shoulder. I am a lucky man and if I am honest the thing that is now affecting me the most is not being able to drive for six months.

At least when I got home from the hospital, I had a lot of snooker on the TV [during the Betfred World Championship] to keep me sane!

Was there a time that you thought you might not be able to play snooker again?

There was a lot of talk at hospital about whether I would be able to ever play again. My wife Lisa and my mum we’re very concerned because they know how much snooker means to me.

I never worried that I would try to play no matter what. When I got out of hospital I tried to play with my arm in extreme pain and hardly able to move. I didn’t pot anything, but I knew I’d get back to it.

How did you first become interested in snooker and why you still enjoy it today?

I’ve loved snooker from as long as I can remember. My dad was a massive fan and a good player. He had so many trophies and whenever it was on TV, he would have it on, so I quickly caught the bug from him.

He taught me how the play snooker on a pool table at first. He always beat me and said it was the best way to learn. I still have a lot of his ways even now, not only the good habits as he hit the cue ball hard and played a lot side which is something that I do!

Unfortunately, he died when he was 41 and that’s why I still play, I think. He played for the team that I now captain, I think he’d be proud, our team has gone all the way to the top league in Southampton and won many cups.

How did you come across WDBS and how does your disability affect your snooker?

I first saw WDBS on TV at the World Championship in Sheffield. I was rained off at work as a window cleaner and I thought that it was something I would like to try. Seeing how players play the game with their disabilities was inspiring.

I have a disability called Poland syndrome which means from birth I have one hand a lot smaller than the other. This affects grip and carrying things. I also have no pectoral muscle in the same side of the body and that stops me from doing a lot of things. For example, I struggle with strength so sometimes I under hit shots and sometimes over hit which can be annoying!

Due to bullying when I was eight, I also lost the vision in my right eye so could probably play in another group but to me the Poland syndrome affects my snooker more.

It has been nearly three years since you made your debut at the 2016 Open Disability Snooker Championship in Gloucester. What have been the biggest changes that you have seen to tour since?

WDBS is getting bigger and bigger. The tour is now going to other countries and there are more and more opportunities to play.

It feels so professionally run. There are very good referees on the tour, a tournament director and the online coverage it gets is so good now. But most of all the players are getting better and more and more people coming to the events.

What is your favourite part of playing in WDBS events?

I love the fact that me and my wife have made new friends from this. I love playing snooker but the whole weekend is amazing.

In the morning I am having battles with people on the table and in the evening with the same people we’re out enjoying different restaurants and having a laugh.

Do you have any particular targets for the rest of the season?

I just want to improve. I’m a lucky man to still be able to play after the accident so I won’t beat myself up if this is my only win, but I will try my very best to win again.

After getting to the final of the Champion of Champions last year that’s definitely going to be a aim for me every season.

What would you say to people with disabilities who might be considering entering a WDBS event?

I would urge anyone considering it to just do it. The events are so much more than snooker, providing an opportunity to meet an amazing bunch of people.

The organisers are so friendly and will help in every way they can. Don’t get me wrong it’s competitive but winning isn’t everything and it is suitable for people of any ability.

The next WDBS event will be next month’s Welsh Open which is open to players from all WDBS classification groups. Enter now online: www.wdbs.info/tournament-entry/welsh-open-2019 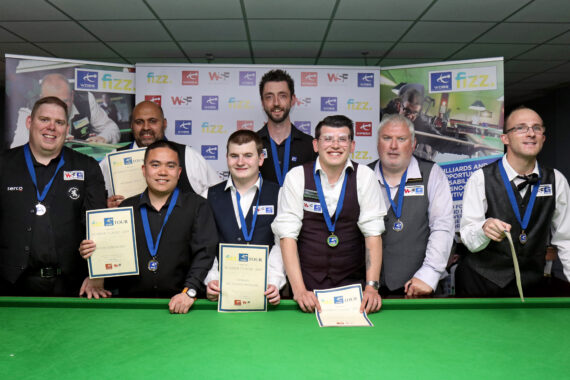 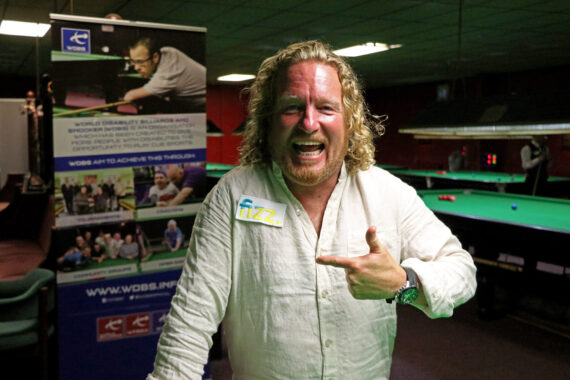