The second Open Disability Snooker Championship following last year’s inaugural event saw entries almost double in number across five disability classification groups (groups 1-5) from a year ago. As in 2015, three main competitions were contested, together with a Challenge Cup event for players not qualifying for the knockout stages.

First the first time at a WDBS event, prize money was offered to the finalists of each category, as well as the overall high break with the support of Renishaw plc and the Paul Hunter Foundation.

The Group 1/2 event for wheelchair players saw Oxted’s Graham Bonnell complete a successful defence of the title that he won almost a year ago with a 2-0 victory against Glyn Lloyd in the final.

Bonnell, who earlier this year visited the Alexandra Palace and received a backstage tour at the Masters following his win last year, won all three of his group matches for the loss of just two frames, before defeating Mark Parsons and Lloyd for victory.

The 54-year-old, who plays with one arm following nerve damage as a result of a motorbike accident at the age of 17, first defeated 2015 winner Daniel Blunn 2-1 in a dramatic semi-final, before repeating the feat against last year’s runner-up Andrew Harper in the decisive match.

For defeated semi-finalist Blunn however, there was some consolation as he claimed the overall high break prize of £100 provided by the Paul Hunter Foundation, with his opening day run of 49.

With six breaks over 30 during the weekend, he survived a close match against Cwmbran’s Adam Leighton in the quarter-finals, before defeating countryman Vishal Malhotra in the semi-finals and Moore for the title.

Subramanian will next be in action at the 2016 World Billiards Championship, which runs until 26th October in Leeds.

Finally, the Challenge Cup was won by Daniel Lee, who edged out Birmingham’s Russell Broomhall in a one-frame final.

For the first time the WDBS also held a Learning Disability Snooker Festival with the support of Special Olympics Gloucestershire. The event included a formal six-red tournament, which saw Rich Yendle defeat David Mac to claim the title. Residents from Leonard Cheshire, who had previously visited the World Championship in Sheffield earlier this year, also visited during the festival and enjoyed opportunities to both watch and play snooker.

As at previous events, the tournament was supported throughout by WPBSA World Snooker coaches Tim Squires, Bob Hill and Danielle Findlay.

WDBS Chairman Nigel Mawer said: “As the Chairman of the WDBS I am really pleased by how we are progressing. We have moved from fewer than 20 entries last year here in Gloucester, to 34 this year and had some long, but rewarding days.

“What I really like about this sport is that you have got players from one category acting as helpers for players in other categories. It is absolutely amazing the camaraderie that is coming out.

“I am very pleased as to where we are, but there is still a long way to go and a lot of work to do.”

WDBS director Jonathan Adams added: “I think that we have shown fantastic development over the last 12 months and I think that our players who have been with us since the start have been pleasantly surprised as to how we have grown, both on and off the table.

“The pathways that we are putting in place behind the scenes to develop the sport will only enhance players opportunities in the future. We have new talent coming in, both from abroad and within the UK, which is strengthening the classes and can only raise our profile as we grow as a governing body.

“When we have got players helping each other along the way, it gives the feeling of a family and ultimately snooker is accessible for so many people and that is the beautiful thing that I think we display better than anybody else.”

The next WDBS tournament will be the Hull Open which is set to run on 11-13 November 2016 at the Tradewell Snooker Centre, Hull. The event will be the second WDBS event open to players with visual or hearing disabilities (Groups 7-8) and will be supported by prize fund sponsors Hudgell Solicitors and Think Telecom.

As at all WDBS events, players with all disabilities are encouraged to attend the Friday open day and receive free practice and coaching.

You can view photos from the event on our Facebook page at each of the following links: 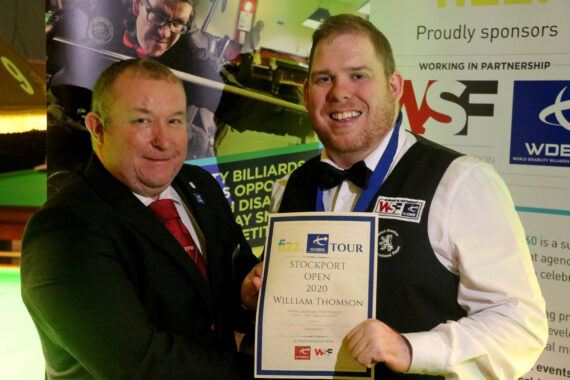