The inaugural winner of the prestigious Vic Hartley WDBS Player of the Season Award will be announced during Wednesday’s World Snooker Disability Day in Sheffield; an honour named in tribute to our friend and colleague who sadly passed away last month.

Vic was born on the 25th July 1931 in Shepherd’s Bush, London. He began work for a local coach company, first as a mechanic, then a driver, before commencing national service where he was based in Egypt. He discovered a passion for this way of life and later joined the Territorial Army, Royal Electrical Mechanical and Engineers Regiment. Afterwards he had a spell at the Royal Military College of Science in Shrivenham.

Loving husband to Beryl for nearly 50 years before she passed away in early 2010, the happy couple were proud of their two children, Dawn and Ann, and their three grandchildren Karl, Dean and Chloe. After feeling unwell on Thursday 28th March, Vic was taken to hospital where he passed away in the arms of his girls.

Enthusiastic about several different sports, Vic’s biggest affection was towards snooker – a pursuit that would involve him in various roles over many years.

Originally signing up for his local team, he was drawn towards the administration and running of the local league. He enjoyed crucial roles such as Treasurer and Results Secretary, and only up until last year he still had ongoing input.

His love for the sport also led him into refereeing. Vic qualified and later achieved Class 1 status – he would go on to have a long and distinguished career in officiating that would see him travel up and down the country and beyond. Away from his own baize duties he was eager to support upcoming referees too, using his years of knowledge and wisdom to tutor and mentor.

Vic represented the English Association of Snooker and Billiards impeccably, regardless of whether he was refereeing at local and national events, or further afield during major European and international competitions. One of his proudest highlights was in 2002 when he refereed at the Crucible Theatre during the World Ladies Snooker Championship.

Having gained experience refereeing disabled and wheelchair players at Stoke Mandeville earlier on in his career, Vic was very keen to be a part of, and promote, World Disability Billiards and Snooker which was established in 2015, officiating in the opening event at the South West Snooker Academy in Gloucester.

Since then the WDBS circuit has grown in strength, and a constant within that uprising success was Vic’s participation at several tournaments; even after a spell of ill-health left him sidelined for a short period, he returned to action in 2018. Only in March – a few days before his passing – Vic was at Jesters Snooker Hall in Swindon to greet players, guardians and staff during this year’s Southern Classic. He was with snooker right up until the end.

His fondness of WDBS was apparent and donations from his recent funeral were gratefully received by the organisation.

Vic was respected by all his peers and away from the table his energy and effervescent nature left us in high spirits. Whilst he leaves a hole within the sport, he will always be remembered by the snooker community.

In honour of his time, effort and commitment, his legacy will also live on through the new Vic Hartley WDBS Player of the Year Award that will be presented annually after each season. As well as the distinction of this title, the winning player will also receive a luxurious bespoke cue case designed and hand crafted by Rob Reed from RR Cue Cases.

A player from each disability category has been nominated for the prize, this year’s shortlisted contenders are Daniel Lee (Groups 1 and 2), Daniel Blunn (Group 3), Mickey Chambers (Groupsa 4 and 5), Michael Farrell (Group 6A), Daniel Harwood (Group 6B), Nick Neale (Group 7) and Shabir Ahmed (Group 8). 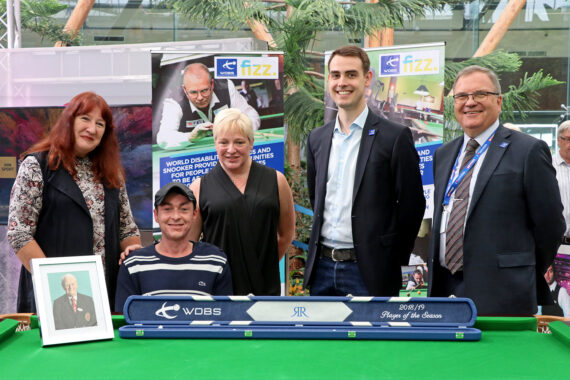