The final World Disability Billiards and Snooker (WDBS) champions of 2022 were crowned at the Stockport Open this weekend.

Held at the Hazel Grove Snooker Club, the event saw a huge field of almost 80 players contest eight tournaments covering a range of different disability classification groups staged, as well as a Challenge Cup tournament for players who did not qualify for the final day. 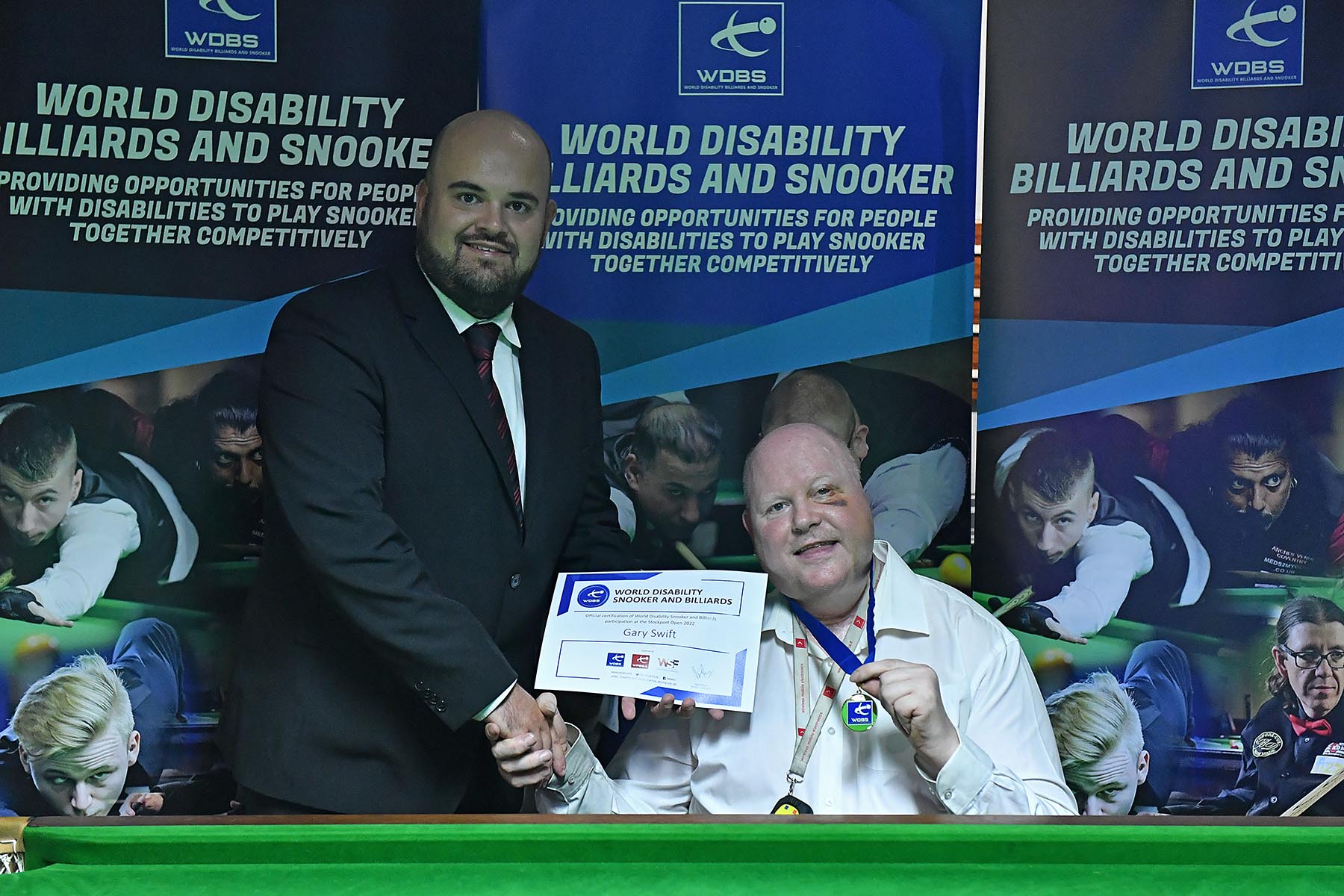 One of two first-time players in the five player group, Swift enjoyed an unbeaten run during the weekend, highlighted by a break of 31 during the best of five final against Southern on his way to the title. 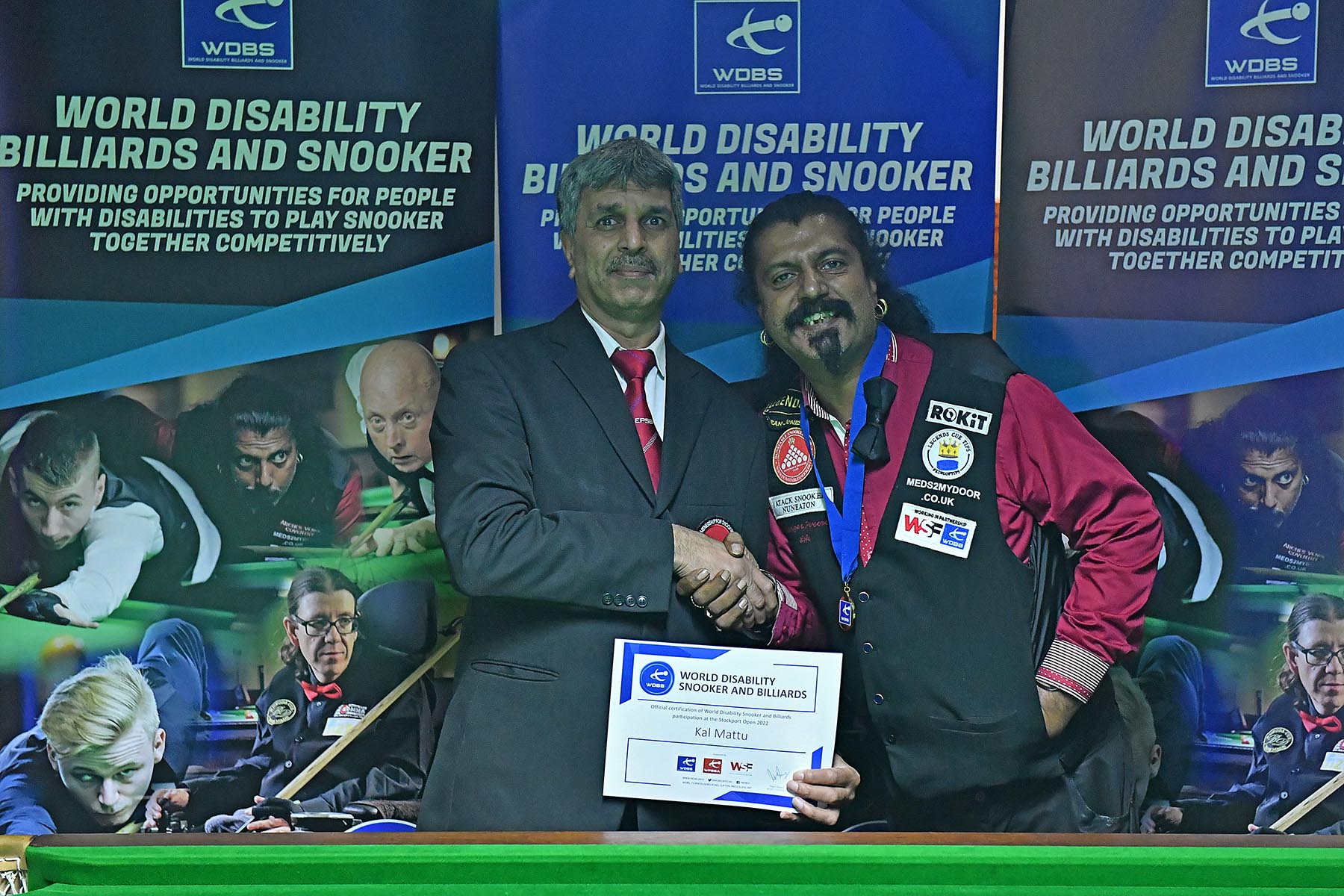 A new winner was also crowned in Group 3 as Kal Mattu defeated Kit Kennedy 4-0 to claim his first full-ranking event title in Stockport.

Finalist at the Hull Open tournament earlier in the year, Mattu came through his round-robin group with two victories, before recording a comfortable final victory to end his wait for a maiden WDBS victory.

The victory was Mattu’s second of the season in total, having won the Mixed Classification doubles tournament at the Welsh Open back in August. 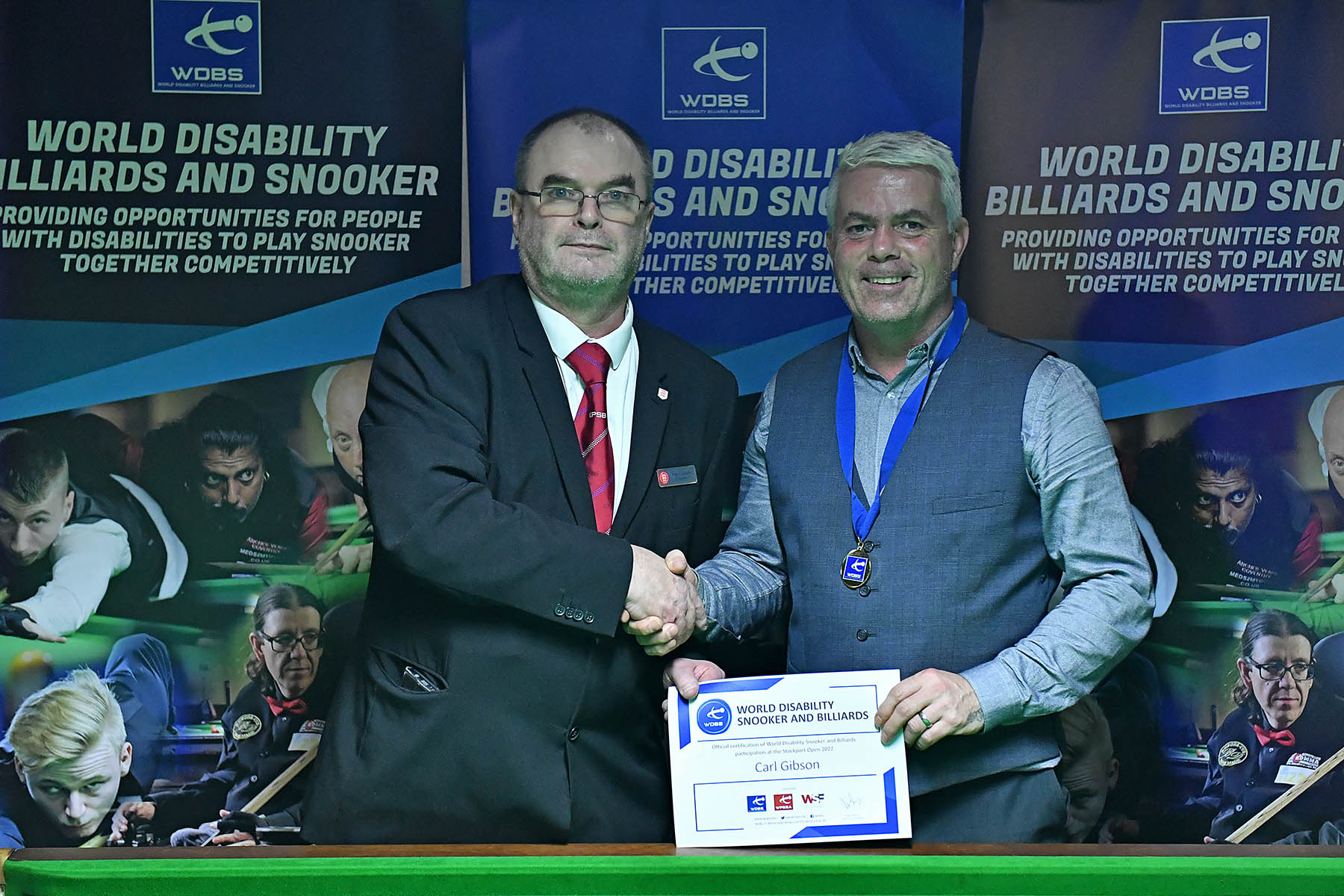 Having made his debut at his home event back in May, reaching the semi-finals, Gibson went all the way at his second attempt following victory against 2020 Stockport champion Thomson.

The pivotal match in the competition would prove to be a high-quality semi-final between Gibson and record 14-time WDBS champion Daniel Blunn, which saw Gibson claim a narrow victory to progress to reach his first final.

Ultimately, the final would prove to be a one-sided affair, with a group high break of 50 from Gibson in the opening frame helping to set the tone on his way to victory. 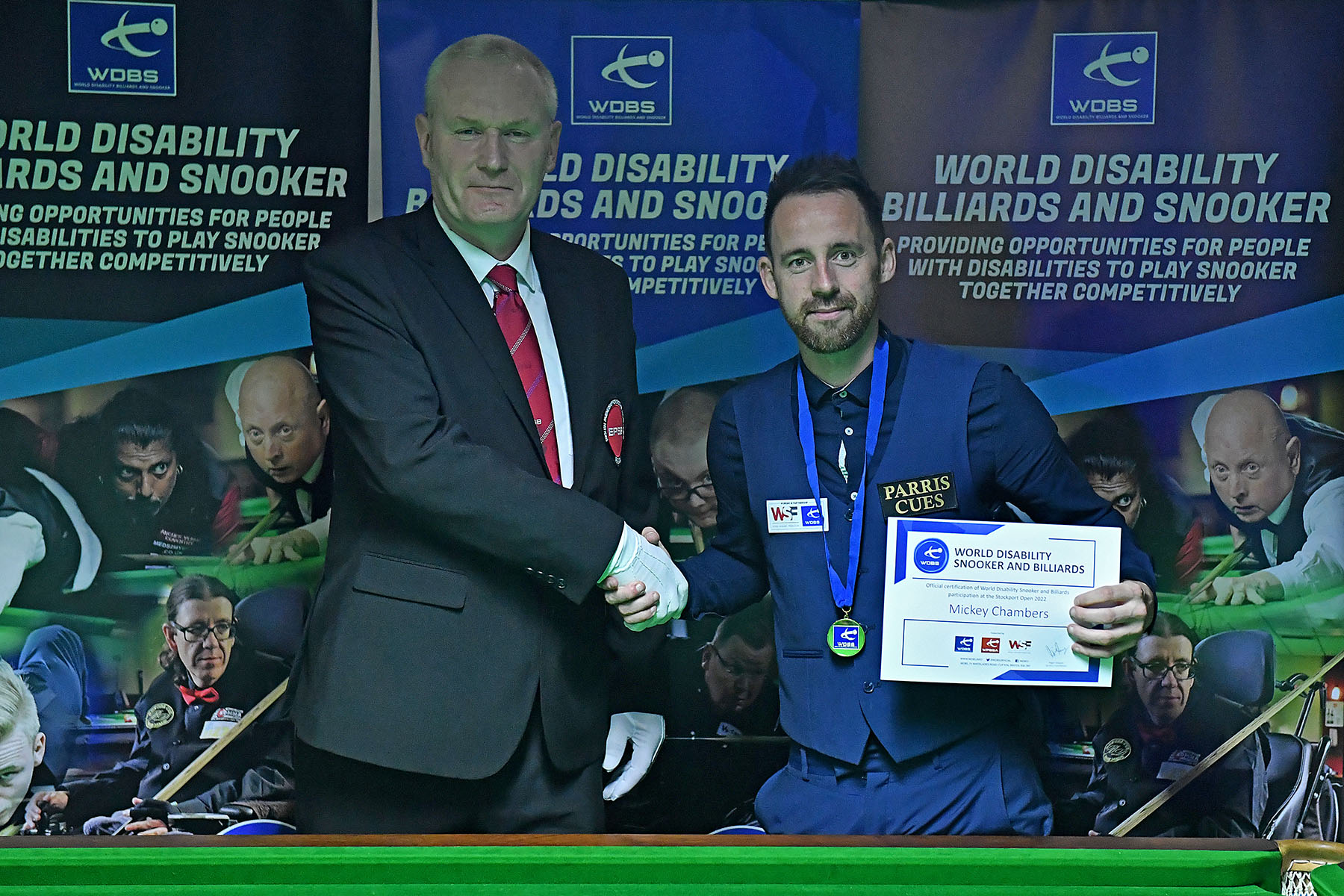 Mickey Chambers continued his dominance of Group 5 with a 3-0 victory against first-time finalist Jason Ellis.

Paired together in the Group A, the duo both progressed to the knockout rounds before seeing off Maureen Rowland and Dean Simmons respectively to book their places the title match.

The final would prove to be deceptively close, with the first and third frames in particular coming down to the final balls, but it was Preston’s Chambers who would prevail to claim his tenth WDBS title to date.

He would also claim the highest break of the group with a run of 40 during his semi-final match. 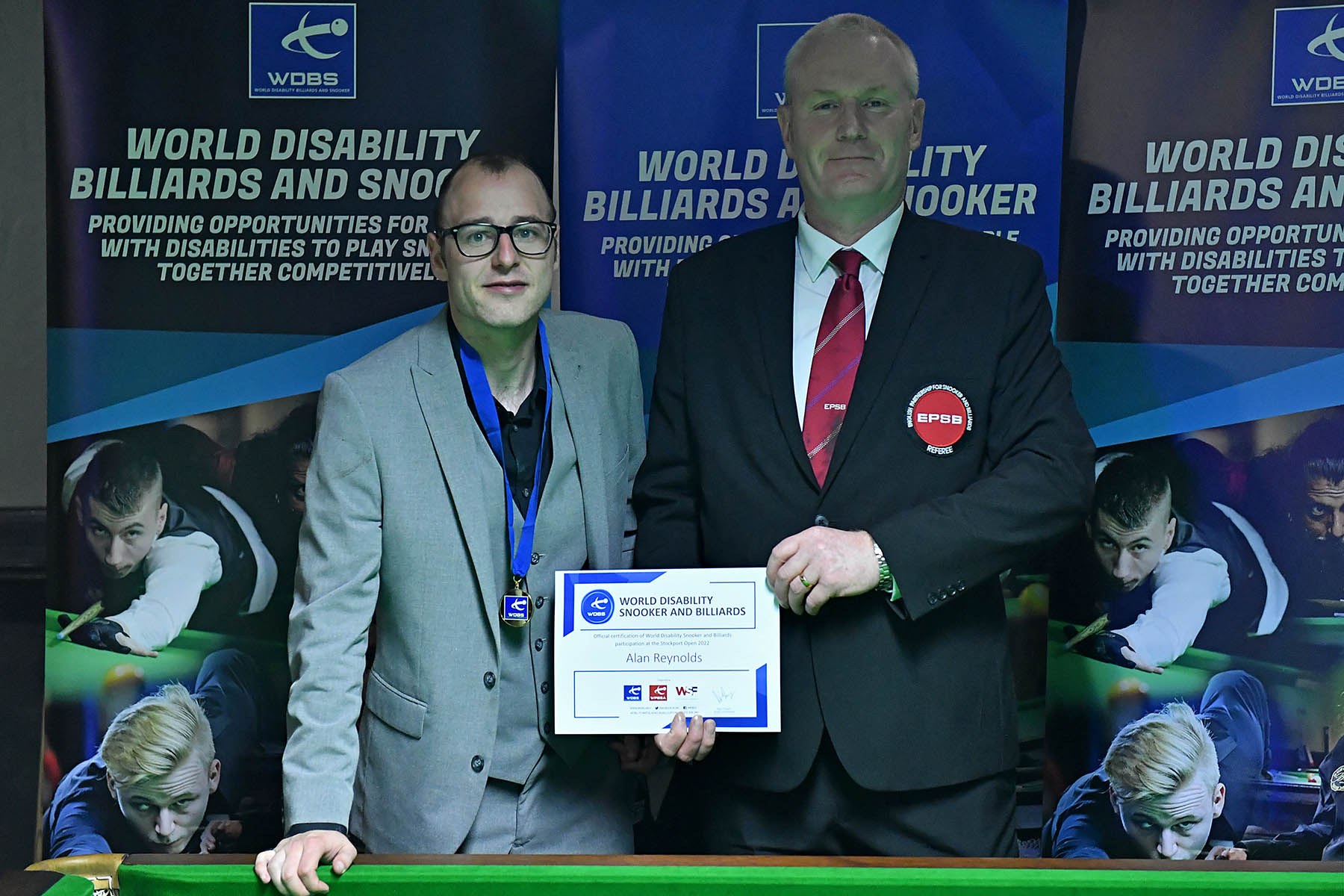 Scotland’s Alan Reynolds completed a successful defence of his Stockport Open title following a 3-1 victory against Mike Busst in Group 6A.

Having claimed his first WDBS title on debut a year ago, he was able to repeat the feat following success against two-time former event winner Mike Busst. 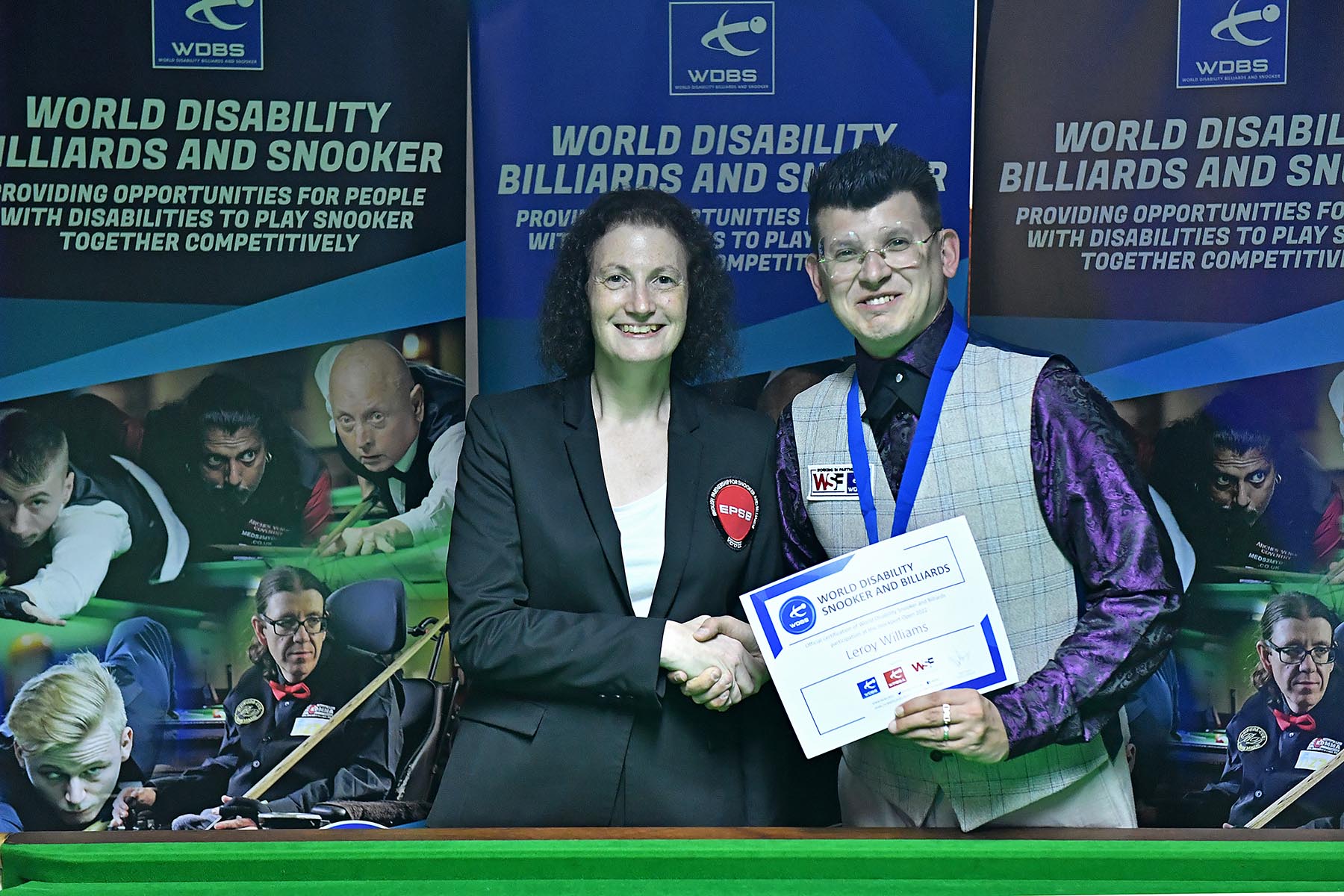 In Group 6B, there was a ninth triumph for Leroy Williams, who survived deciding frames against Lee Hague and Adam Noonan to reach the final, where he enjoyed a more straightforward victory against Christopher Goldsworthy to claim the gold medal.

The highest breaks in Group 6 were compiled by Liam Crook (30) and Leroy Williams (36). 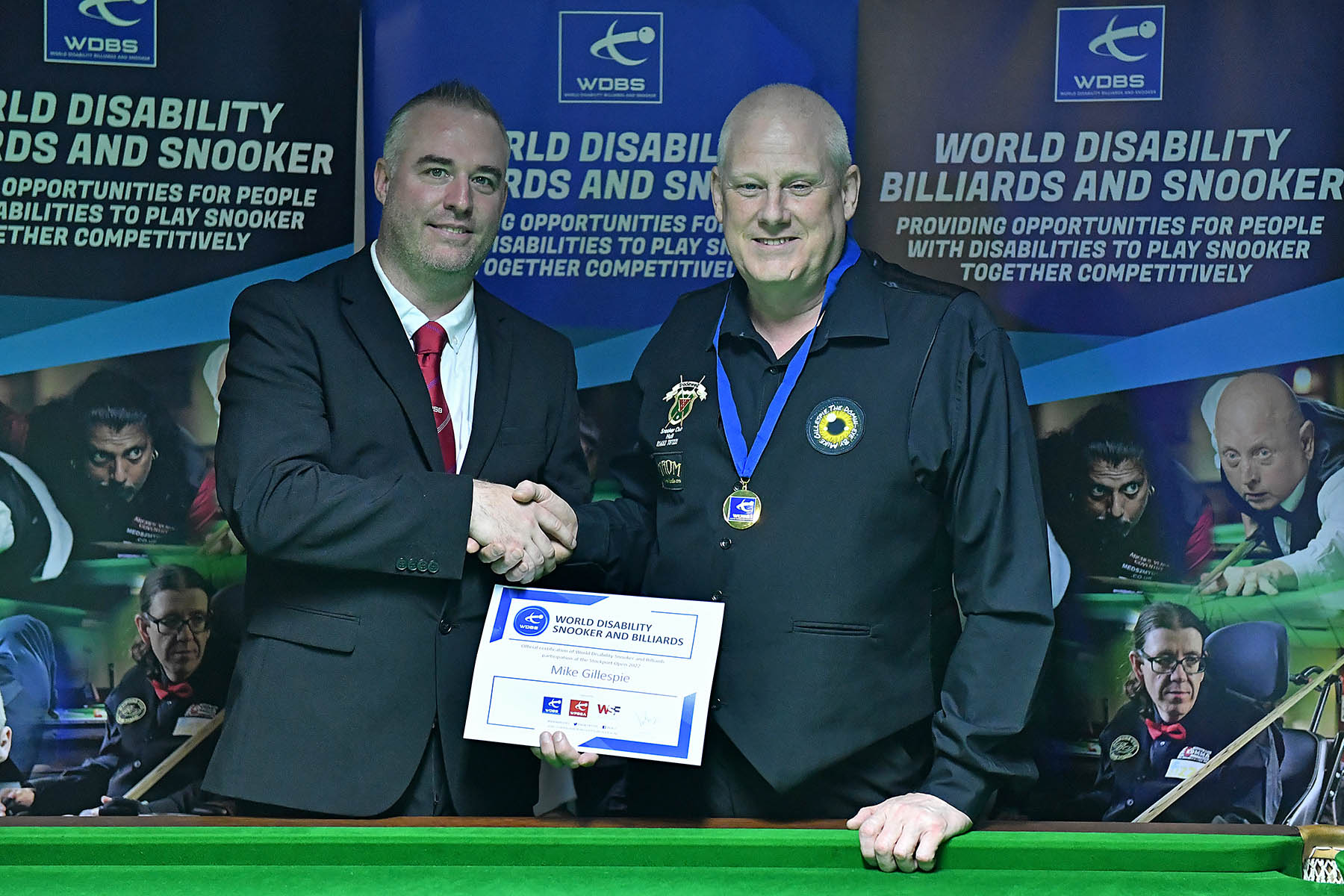 Mike Gillespie won his third WDBS title following a 3-1 victory against the returning David Baker in the Group 7 tournament for players with visual disabilities.

Having finished as the top two in the seven player group stage, the pair came through semi-finals against Paul Smith and Ronnie Allen respectively to reach the title match.

Twice a winner at Challenge Cup tournaments, Baker was competing in his first tournament since the 2019 Hull Open, but it was Gillespie who would come through to add to his own previous victories in Hull and Derby.

Gillespie also made the highest break of the group with a run of 38 during the group stage. 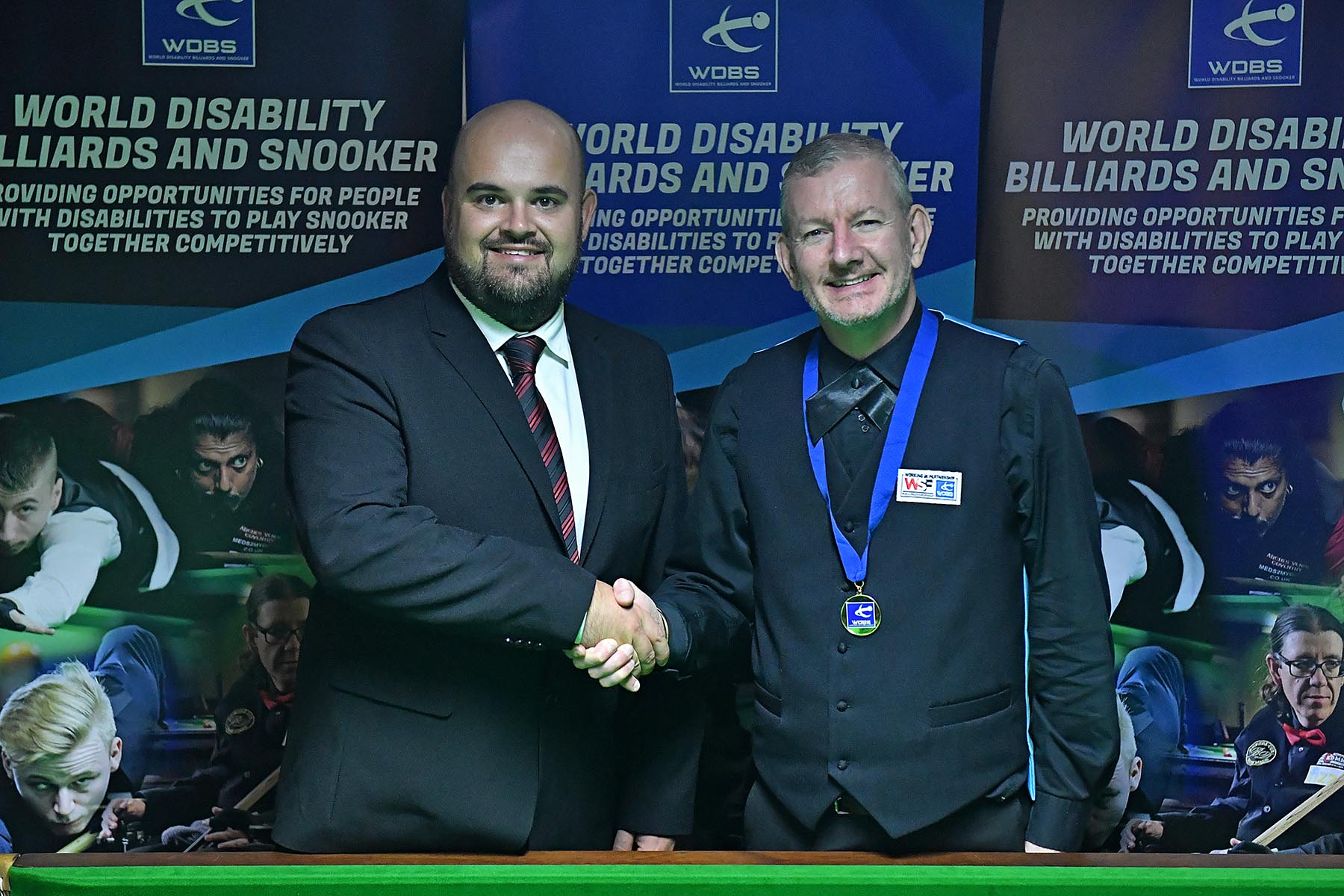 A previous two-time runner-up, most recently at the Welsh Open just six weeks ago in August, Taylor defeated Tony Davies and Welsh junior Dainton Barrass to earn a third shot at the gold medal match.

It was Taylor who made the stronger start to move to within a frame of the title, before Grant clinched the third on the black to keep his hopes alive at 1-2. A break of 36 from Grant in the following frame appeared to pave the way for a grandstand finish, but it was Taylor’s time to pot a decisive black and break his title duck.

The highest break of the group was made by 18-year-old debutant Dainton Barrass in his semi-final with a run of 44. 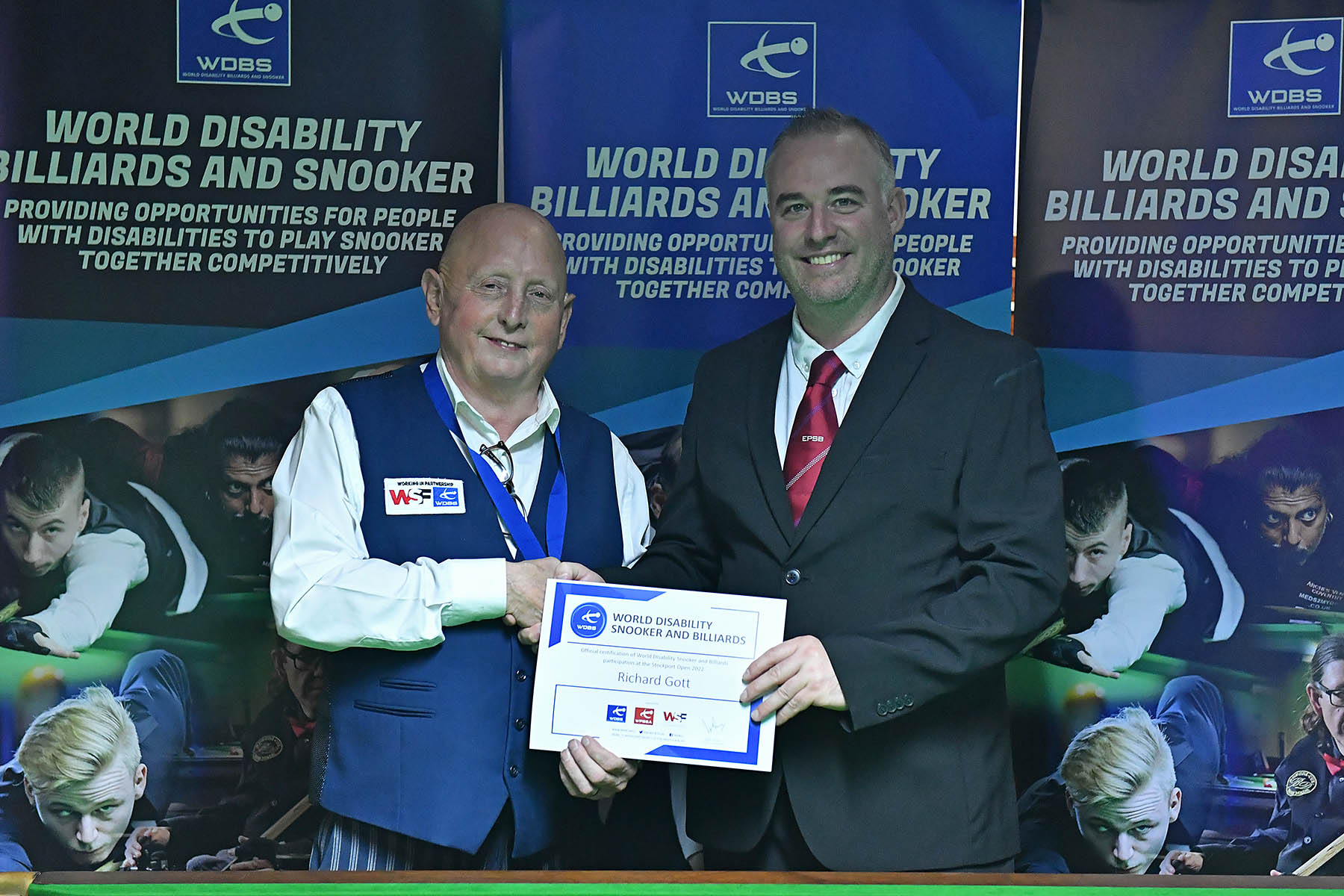 In the Challenge Cup event for players who did not qualify for the knockout rounds, there was victory for Richard Gott who defeated Sonnie-Lee Bell, Aaron Dunford, Steve Cartwright and in the final Robert Marriott. The victory is his third at Challenge Cup level, having twice won pairs events in 2018.

The WDBS Tour will return in 2023 with the staging of the British Open at the Woking Snooker Centre from 13-15 January. The full entry pack will be available in due course.